When I picked up Sukey Forbes' new memoir, The Angel in My Pocket, my first thought was, "Oh, another memoir about grief." It's not that I don't appreciate grief-focused memoirs. In fact, they've been a lifeline for me in the four years since losing my ex-fiancé. Even though my own loss was due to separation, not death, I've found comfort and… END_OF_DOCUMENT_TOKEN_TO_BE_REPLACED

I hope you will be moved as much as I was by this post from Canadian writer Donna Sinclair. It originally appeared on Wood Lake Publishing’s blog essential-spirituality.com. 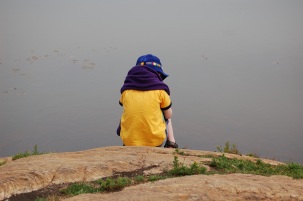 A long long time ago I was a mystic. I remember it well. I was about five years old. We lived on an island in Lake Temagami. My father had placed me in the bow of the rowboat, and I trailed my hand in the water and understood that the lake and the boat, my father and me and the sun’s warmth and the pines on the approaching shore were one.

This was not a very coherent thought. But it was laced with feeling so powerful that, decades later, its memory has returned like a hurricane.

In the intervening years I had lost that connection. It hurt too much to be one with a land that is in pain. I had flown over Labrador and seen the red scars where ore-hunters had bitten into the land. I had driven through endless suburbs…