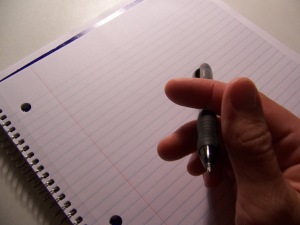 Everyone who is a writer or knows a writer is aware of how terrifying it can be to sit down in front of a blank page. Why? A carpenter doesn’t look at a bare cinderblock foundation, drop his tool belt, and run away screaming. A chef doesn’t look at an empty frying pan and despair. Why does the writer, confronted with a blank piece of paper or a window labeled “Document1,” want to give up the ghost?

I think it has something to do with the fact that the carpenter has blueprints. The chef has recipes. And no one will complain if they build or cook the same thing twice. The writer has no such luxuries. The writer is cursed to start over, from scratch, every time. Like Sisyphus. Except the writer has to make the boulder, and each time it has to be a unique and precisely sculpted blend of levity and gravity, transcendence and relatability. In short, a miracle. By 11:59 tonight, please.

Honestly, I think the real trouble lies in that a writer doesn’t know how she does what she does. It’s not wise to admit that these days, when everyone is supposed to know everything, especially about the way they make their living. But it’s true. A writer can make herself sit at the desk and string words together, but she can’t make them be the right ones. She can try to think profound thoughts and have unparalleled insights, but trying will probably make the good stuff flee, like the soot sprites in Studio Ghibli’s My Neighbor Totoro.

Writing is not so much a process of creating as it is waiting–waiting for the good stuff to show up. We writers fill up a lot of pages in the waiting, what Anne Lamott calls “shitty first drafts.” Sometimes there are second drafts that are just as shitty. Or third drafts that are even worse. But the practiced writer keeps cranking out the pages until, here and there in all the crap, they see enough decent ideas or turns of phrase to make them believe they have the kernel of a story, or an essay, or a book. Then they trim out as many of the awful passages as they can bear (sometimes the awful passages can be very close to one’s heart), whittling things down to a tenth of their previous size, and the process begins again. Write, write, write, until more good stuff appears and we can throw more of the crap away.

There is no recipe. No blueprint. No line of stepping stones that will lead one to the creation of a brilliant piece of literature without moments of wandering in the dark. We writers strive to bring into being something bold, original, and heart-stoppingly magnificent. But, as clichéd as it may sound, that stuff only arrives by way of inspiration. Don’t get me wrong. We writers have to work hard. We have to show up. We have to put pen to paper or fingertip to key. We have to cry and sweat and bleed. But there’s no direct link between our suffering and the end result. Our tears, our sweat, our blood get poured out, and then, magically, from somewhere off in left field, the miracle appears. And the end result seems so disconnected from our effort that we wonder why it couldn’t have just shown up earlier, before we had that little visit to hell.

But of course, the work was necessary. The work did get us the result. It just happened somewhere in the depths of the unconscious. We couldn’t see the gears turning, the neurons firing, the gods descending and re-ascending from our little brains. And so, when it’s time to face the next blank page, we still have no clue how we do what we do.

And we’re not at all sure that it will ever happen again.

8 thoughts on “The Reason for the Writer’s Terror”